David is a very important character in JODDAS VAPD and in real life. If I was never friends with the real life David and we both didn’t have an strong interest in Calvin & Hobbes then the Calving & Hobbes stage would never had existed and JODDAS VAPD would not even be on this page period. Back in 2000 the two of us drew Calvin & Hobbes strips all the time in school. When I finally ended up moving away I promised I would continue to make more comics. I would like to think he kept his promise too, but it’s been ages since I’ve seen him.

Click image to enlarge
From the Calvin & Hobbes stage where a lot of my comics were very vulgar and inappropriate. I edited a lot from this strip as the song the characters are singing is highly offensive toward the character in the strip who is in fact based on a real person. David never had a real introduction, but he was an original JODDAS VAPD character.

David for whatever strange reason was an obsessed choir singer in the Calvin & Hobbes stage which never made sense to me as I was the choir obsessed person at the time. Back in this stage anytime I needed a character that wasn’t Daniel, Drew, or Scott I would just throw in David.

Click image to enlarge
David in the Life Sucks Stage. Ironically this is one of my favorite strips from this stage.

In the Life Sucks Stage of JODDAS VAPD David became a much more notable character. He had an actual personality and was essentially a nice person. With his nice persona I gave him a special segment of Life Sucks called AM Talk where he would interview various pop culture icons at the time (or just celebrities I hated)

Click image to enlarge
Not my favorite David strip from the Life Stinks stage, but this is the very first strip.

David in Life Stinks is more closely related to the David in JODDAS VAPD today. When I was in fourth grade I was always impressed with how much my friend knew about Dinosaurs and Calvin & Hobbes that I just figured he was a smart guy. So David became the smart, but very sarcastic guy we all know and hopefully love today.

I think out of all of my characters in JODDAS VAPD David has had the biggest journey in changes. Not only in character designs, but in character personality as well. I could never have made JODDAS VAPD without this guy in my life and I will always keep him in my stories. David has the line eyes in respects to Bill Waterson’s Calvin & Hobbes as without him and David like mentioned before JODDAS VAPD wouldn’t exist.

Click image to enlarge
Davids design has many different changes from clothes to hat to even hair and glasses.

David is a very well educated young man. He doesn’t claim to be a genius only the people around him do. He wants to major in chemical science as it’s his passion to learn as much about how life works. David may seem stand offish, but he’s actually a kind man who cares for his friends deeply. 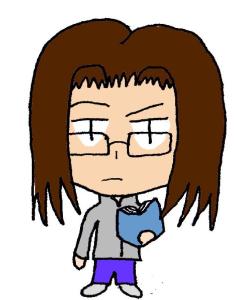